As a late thirties woman without children, I dread Mother’s Day. Being childless is  annoying throughout the year  for two main reasons. People are going to excessively question you and often times don’t have a bond strong enough for the answers.  There’s projects being thrusted on you when you are a childless woman. Why not? You’re just a 34year old  spinster who sits home and feed her cats. But Mother’s Day has an annoyance on its own.  Other people either treat you with pity or act uncomfortable around you. It’s suggesting that my worth is based on what I do with my body or what my body can do. Some women even throw shade trying to make themselves feel more adequate. It may include statements like I wouldn’t feel like a woman without my child. Who is going to take care of you when you get old? Women want to build these careers then have children when they are old and wonder why something wrong with the baby.

Yes, those are actual statements that I’ve heard. I usually remind people that we all have different purposes in life. Many women who make these statements are broken, not emotionally intelligent, or a moocher with a quid prop quo mentality. Being childless doesn’t make me feel inadequate. I have great qualities, talents, and gifts that I share with the world. As a former prisoner of other’s thoughts, my validation comes from either above or within. Anyone else’s compliment is simply a reminder.  My mantra as it relates to relationships is “I only want what God has for me.” By having a child, you are forming another relationship. Some women aren’t meant to have children due to other purposes in life.

What if Harriet Tubman had a child? Would she have been able to free hundreds of enslaved Africans with a baby strapped to her back?  What if Oprah Winfrey’s child from her teenage years would have lived? Do you think that she would have become a talk show queen? Would she have built a school or sent dozens of men and women to college? What if Rosa Parks had to think twice about giving up her seat because she had a child at home waiting for her arrival? Would she be the face of the civil rights movement?  I’m not saying that women with children aren’t powerful or impactful. They can still create massive change in the world. I’m acknowledging that they have to make choices keeping their responsibility as a mother in mind. Some women have a different purpose in life that requires more focus in other areas outside of their own family. Many women without children are wonderful aunts, big sisters, mentors, stepmothers, or godmothers. 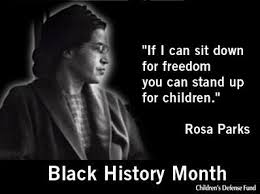 Some women may never feel a baby’s movement in their womb. Yet, they will birth a movement. They may never change diapers but change the world. They may never wake up in the middle of the night to sooth a cry. Yet, they may stay up many late nights to sooth the cries of a community by creating solutions. Some women are physically infertile but plant seeds of hope, joy and love in the lives of others daily. Our worth isn’t based on what we do with our bodies or what our bodies can do. Let’s stop competing and comparing women vs wombmen and vow to make a difference regardless of titles.